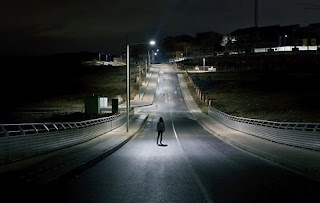 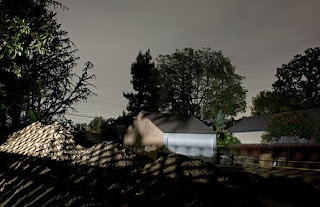 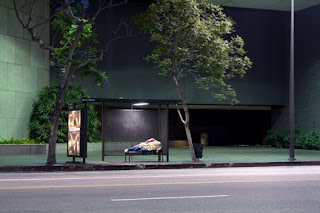 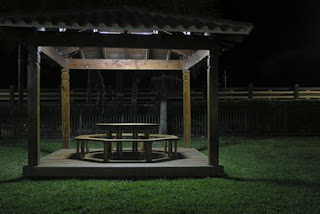 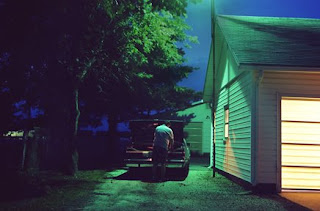 I spoke at length of my first go with editing via the Pick 5 challenge through Justin Visnesky's work, whose images I was already familiar with. Because I'd been able on other occasions to sit with Justin's pictures, to process them and mull them over, and because our work is similar thematically, I found that arranging five of his photos felt like being able to edit my own work without the baggage attached. Having not been exposed to J. Wesley Brown's photographs prior to hearing from him I was presented with a different editing experience. I was still engaged in the act of trying to tease out a loose narrative, as I do with my own series, but I also found the process much more straightforward and quicker with his images. Perhaps because most of his work is shot at night, and because the ones I liked the most were very obvious to me right off the bat, once I narrowed it down to five the order fell into place almost effortlessly. It was an enjoyable process.

After looking through Wes' website so carefully I found I came away with a sense that with a tighter edit his series could showcase his work in a stronger way. I asked if he was open to some constructive criticism and kindly he allowed me to pass along my opinion. The one notion I kept coming back to was a sense in some of his photographs that they were bordering on editorial fashion, which I'm sure was unintentional but was coming through nonetheless. In his Semblances series I found some of the more close-up portraits of people jumped out in a way that detracted from his stronger, moodier pictures; they seemed less spontaneous, and therefore I felt less connected to them. At its strongest I think some of his pictures have an element of suspense that I appreciate, and the "fashion" shots cast those more compelling pictures in a weaker light through comparison. I just had a chance to look at his website again and Wes has taken some of my suggestions to heart, and I think it's coming together more now. (Note: I always offer any advice with the disclaimer that the photographer can disregard whatever doesn't work for them; ultimately, as we passionate artists know, it's about our own personal vision, but I too will rework things if I get a new read on how my photos are coming across).

After I gave my suggestions I was rather fascinated to hear Wes' take on how photographic work is presented in general. He wrote: "I feel the art world, or our photography microcosm of it, demands that work be grouped. I really, truly, hate this. I feel like I should be able to follow the tradition of painting and make individual works/images/scenes that stand on their own and individually draw the viewer in and impact. I never want to be pigeon-holed into one aesthetic or theme. I feel it would stifle my creativity." It's a point I hadn't considered, and just shows me how in many ways I bring my own bias to the table. That said, I still think that a strong edit is crucial, whether it focuses on a narrative trajectory or not. Especially with the web, where a site is experienced by clicking--often quickly--from one image to the next, photographs inevitably will be seen as relating to one another. Therefore, even more so than with paintings (which still need to be connected on some level), photographs can't help but follow an arc. Whether it has anything to do with "narrative" per se, I think the whole has to relate to the individual parts. But I get where Wes is coming from, and I like how passionately he seems to relate to the act of art-making. And trust me, I struggle with all this as much as I know any of us do. I just thank Wes for entering into a dialog with me, and giving me insight into his process.